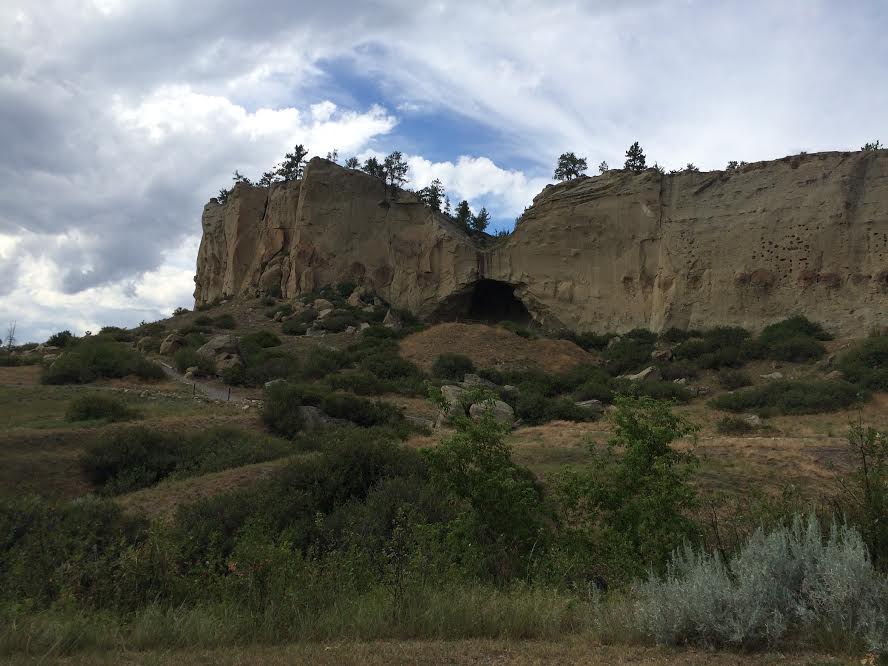 Fatigue grips your body. You have been travelling for hours with no shelter from the elements.  There is snow covering the ground and the wind is howling, freezing your extremities.  In the distance you hear the cry of a bobcat, and something rustles in a bush at your feet.  Along the horizon you make out a set of bluffs, realizing that if you can just make it a few miles further you will be able to escape the grasp of the wind.  In the undercut caves of the bluffs, you find reprieve.  As you inspect your surroundings it is obvious that you are not the first to seek shelter among these cliffs.

The 23 acres of majestic sandstone bluffs carved by wind and water currently known as Pictograph Cave State Park have served humans for over 2,000 years.  This state park, located only 5 miles south of Billings, features three caves, Pictograph, Middle, and Ghost.  Near the entrance to the park is a newly constructed Visitor Center that offers several exhibits about the history of the area and what you might find during your visit, a gift shop, and a knowledgeable staff.  It is highly recommended that you make a stop in the Visitor Center before trekking up a wheelchair accessible path to Pictograph Cave.

At first glance, you may not be impressed with the view of the cave.  You were expecting vibrant drawing that you could easily depict and construct your own tales about their origins.  But take more than a glance at the cave walls.  You likely have already noticed the red pigment scattered throughout the area, but as you allow your eyes time to adjust you will begin to notice the images in white and black as well.

One of the most visible pictographs in the cave portrays a beaver, seven rifles, and 23 dashes.  Although a large amount of speculation is held about the hundred images found in the cave, archeologists mostly concur on the story behind this image.  An article in the Great Falls Tribune summarizes, “In May 1823, the Jones-Immell group of the Missouri Fur Co., laden with a winter’s worth of fur, was ambushed across the river from the caves by Blackfeet, who killed seven trappers and seized the fur cache.”  This drawing was likely made by the Blackfeet warriors after the resolution to this conflict.

Many of today’s visitors come to the park strictly because of the cave drawings, however, the site gained the majority of its archeological significance as a result of the excavations that uncovered over 30,000 artifacts from those who have sought refuge within the cave walls.  The digs, officially commenced in 1937 by the Works Progress Administration, recovered artifacts from a range of dates, the most recent barely 200 years old.  Native Americans in the area, following in the footsteps of their ancestors—including well known figures such as Chief Plenty Coups—continue to hold the land sacred, seeking not only physical relief in the shadow of the bluffs, but spiritual reprieve.