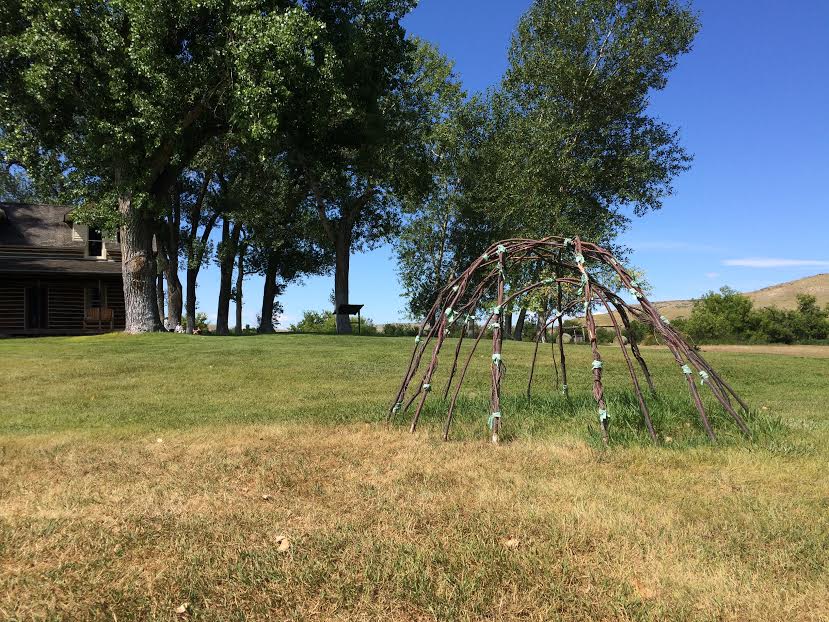 The transition between the days of the buffalo and life on the reservation was not easy for the Native American peoples.  As the white men continued to move across the country, and settle in the west, the Native American way of life was undergoing immense changes that would forever affect the people.  Chief Plenty Coups State Park, located on the Crow Reservation, stands today as “a reminder to Indians and white people alike that the two races should live and work together harmoniously.”

Chief Plenty Coups was the last traditional chief of the Crow Tribe, and it was his leadership that was instrumental in the transition from the nomadic days to a more structured and agriculturally centered life.  Chief Plenty Coups became chief at a young age, around 25, and during his time as a warrior completed each of the four required deeds multiple times, fulfilling the vision that had given him his name.  The four deeds included leading a successful war party, capturing a horse from an enemy camp, seizing an enemy weapon during battle, and striking the first coup.   Even as a young man, Plenty Coups served as an avid advocate for his people, fighting for their rights and preserving their lifestyle.  His strong leadership continued to improve with age, and he quickly earned the respect of the Crow people.  Although he urged his people to adapt to life on the reservation, he worked to retain the traditions of his ancestors.

Realizing a need for cooperation, Chief Plenty Coups traveled to the Nation’s capital in Washington D.C. on multiple occasions to negotiate on behalf of the Native American peoples.  Though he saw the need for cooperation, he focused on creating fair terms that would allow for adaptation rather than total assimilation into white culture.  Plenty Coups was also an advocate for the education of his people, realizing that “education is your most powerful weapon.  With education you are the white man’s equal; without education you are his victim.”  Looking at some of his negotiations one may argue that Plenty Coups was in favor of assimilation, however, an analysis of the environment surrounding his decisions suggests otherwise.  During his time as chief, the Crow people were facing both cultural and physical extinction.  Chief Plenty Coups observed what was happening around the country and took the necessary steps to ensure that his people could survive the new threats.

Plenty Coups was one of the first of the Crow people to settle into reservation life, building a two story home, operating a general store, and ensuing agriculture (horses, cattle, hay, wheat, oats, and apples).  Plenty Coups led his people by example and was the key to their survival in a time of tumultuous transition.

Chief Plenty Coups State Park was set aside by the Chief himself, after being inspired on a visit to George Washington’s estate in Vermont, Mount Vernon.  The 40 acres set aside not only commemorate the chief, but his legacy of cooperation and adaptation.  The park features a visitor center and museum, a memorial, Chief Plenty Coups’ original home, and a guided hike.  The park offers beautiful scenery and is the perfect place to enjoy a peaceful afternoon.  One of the aspects that stands out most within the park is the well-kept picnic grounds.  With several areas for group visits, countless tables, playground equipment for the kids, beautiful trees, and a babbling brook to set the mood this is the perfect stop to get out of the car, stretch your legs and enjoy your historic surroundings.