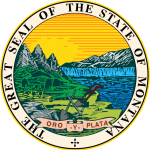 There are dark spots in Montana’s history. One in particular haunts me. A 2001 survey by the North American Vexillogical Association (more on them in a second) found that Montana’s state flag was the third-worst state flag in all of North America. Now, 2001 was basically a geologic age ago, but the survey was recently … Read more