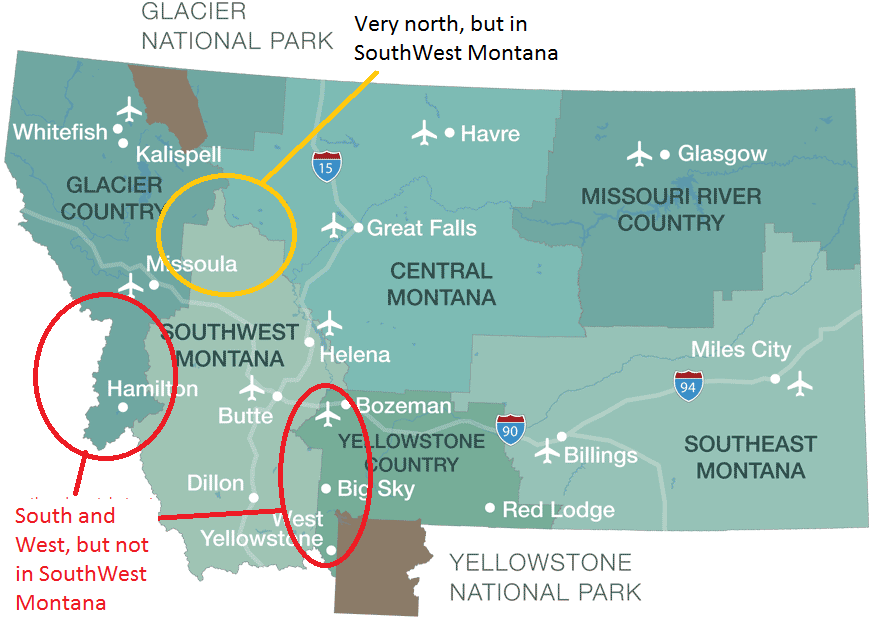 N.B. Our apologies for the title, it was to easy a reference to pass up. We thought about using “Wherefore art thou SouthWest Montana” but, frankly, have never been entirely sure of the meaning of “wherefore.”

Imagine this scenario: you’re sitting in a bar with a few friends and friends-of-friends. You say you blog for SouthWest Montana. They say you probably write about Bozeman a lot. You say no, but you’re planning a trip to Augusta. In silence they consult their mental map of Montana. You watch their bemusement turn to concern as they wonder if their sense of geography is really as bad as all that. At this point the conversation could (hypothetically) end one of two ways:

A) you explain the rationale behind Montana’s tourism regions, and they leave the encounter a better informed individual, perhaps after buying you a beer.

B) they say, “that’s the most ridiculous thing I’ve ever heard. I think I want the nachos.” They then eat all of the nachos by themselves and resolutely reject all your attempts at explanation.

In reality, this scenario has only ever ended one of those two ways. But no longer! What is a blog for if not to hold forth on topics otherwise impossible to insert into conversation? And if people don’t like it, then they don’t have to keep reading (no, don’t leave! I like you! And I promise this won’t get too boring!).

In the 1980s, tourists didn’t come to Montana. Montana ranked 49th in state spending on advertising. So in 1986-87, the Montana legislature implemented the state lodging tax as a means of generating money to spend on promoting Montana. Montana was also divided into six tourism regions. This was a really good move. It would be hard for towns like Terry and Willard and Sumatra and Broadus to promote themselves on a national level.  But if they combined with all of the towns in their corner of Montana, they could have some real clout (and they do, I constantly get ads for Southeast Montana when I wander around online). Almost all states divide themselves into regions for tourism purposes. In the ‘80s, common practice was to name the regions for defining characteristics. Montana had some pretty obvious region names—Glacier Country (by Glacier National Park), Yellowstone Country (around Yellowstone NP), and Missouri River Country (the northeast corner, around Fort Peck Dam)—as well as some that needed a bit more explanation—Custer (after General Custer, of the Battle of the Little Bighorn), Russell (after western painter Charlie Russell) and GoldWest (the region including the majority of Montana’s early mining history). They divided these regions up on county lines, which makes perfect administrative sense, as well as commerce sense—for example, even though Hamilton and Philipsburg are roughly the same distance from Missoula, Hamilton is more economically linked to Missoula, and Philipsburg to Butte. Everything so far makes perfect sense.

Except the names. Around 2010, somebody in Custer Country pointed out that the name celebrated a man who, at the very best made a whopping tactical blunder, and at the worst represented a policy of systematic repression and disenfranchisement. The more officials looked into the name, the more they realized it didn’t work in the age of Google. Tourists—any tourists, in-state, out-of-state, whatever—might have a vague geographical notion of where they want to travel in the state, but usually not of the detailed history of the region. In addition the name “Custer Country” ignored the other attractions of the region—like the dinosaur digs, the world class hunting, and the blue ribbon fishing. Russell Country found it is was experiencing similar problems. Even GoldWest Country (a fairly apt description) suffered from not being a google-able place.

In 2012, Custer Country changed its name to Southeast Montana. Clean, simple, descriptive. And it taps into the national recognition of the state. Russell and GoldWest Countries quickly followed suit, becoming Central Montana and SouthWest Montana, respectively. Yellowstone, Glacier and Missouri River Countries didn’t bother, already possessing descriptive names with national clout. That should be the end of it, but as countless conversations have taught me, it isn’t. By following county lines, Central Montana reaches the Canadian border, and nit-pickers point out that borders, by definition, aren’t very central. SouthWest Montana includes Augusta (not south of hardly anything) but doesn’t include Bozeman (a pretty important town in the southernly-westernly part of the state) or the Bitterroot Valley (about as west as Montana gets).So Montana’s tourism regions, and region names, might not make the most sense. They might cause more than a few towns some identity confusion. I’ll admit that. But there are 1,952 different ways to divide the state (I made that number up). Transportation arteries, waterways, river drainages, major industries, most popular recreations, favorite colors…Montana is a massive, interconnected, unique place, and hopefully tourism regions make it just a little easier for visitors to navigate. You can accuse me of drinking the tourism region Kool-Aid, but I’m starting to not mind the tourism regions, or their names. Oh, and if you ever see a harassed looking blogger type trying to explain 20 years’ worth of tourism policy to a group of uninterested nacho eaters, buy the poor guy a beer.