A few weeks ago I stopped by a pond near the Jefferson River and took some pictures of trumpeter swans. It was an incredible experience, watching those massive birds lift from the water, beating the air with magnificent wings. When I got into the office the next Monday, I started researching trumpeter swans. For me, the most difficult part of any blog post is the pictures, and, having the pictures, I figured I ought to write a post. I soon discovered that the pictures are not nearly as good as I thought, which happens every time a camera finds its way into my hands. I also discovered that while I had accumulated an encyclopedia entry’s worth of information, I had no narrative to use to frame a blog post, also a far too frequent occurrence. 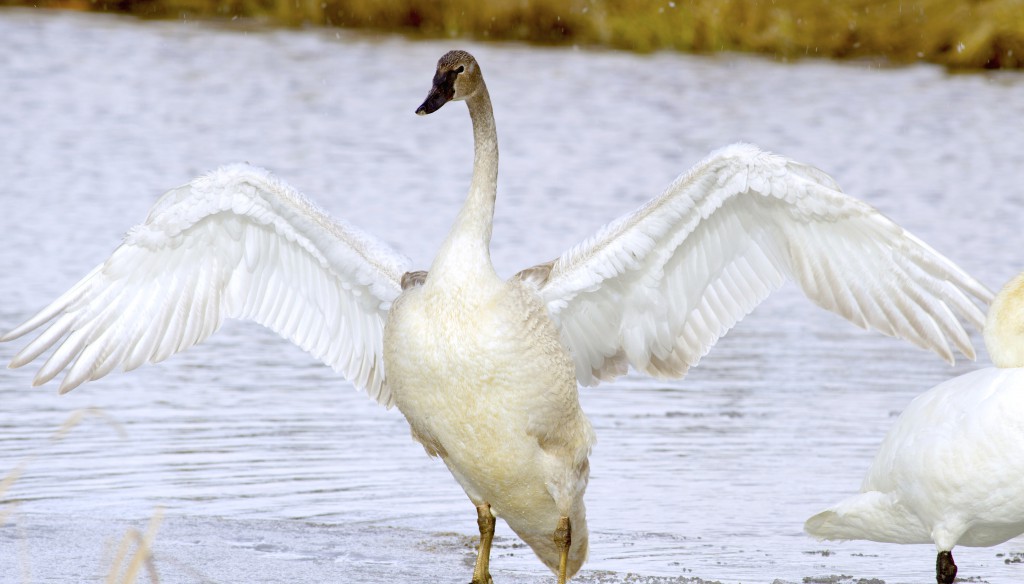 A desperate email to Tempest’s videographer fixed one of those problems. Mike was in Wyoming, taking some truly spectacular video of Teton National Park, and had some great stills of trumpeter swans. The narrative framework problem? Well I still haven’t quite addressed that, because every time I try I just start thinking of E.B. White’s The Trumpet of the Swan, and I get distracted.

After my most recent spate of research, trumpeter swans may have entered the list of my top five favorite birds. Over 5 feet tall, between 20 and 30 pounds and with wingspans sometimes exceeding 7 feet, trumpeters are massive—among the heaviest flying birds in the world, and the largest species of waterfowl. All this and they survive almost entirely on the squiggly green plants in ponds. You know the stuff, the plants that brush against your legs in lakes and rivers and freak you out because you think they might be some sort of water monster. Pondweed and waterweed. Damp salad, essentially. That’s what trumpeters eat. You probably already know that trumpeters usually mate for life, can live up to 20+ plus years, are excellent jazz musicians, and communicate by writing on a slate hung around their necks. (Ok, so E.B. White got some of his facts wrong, but what do you expect from someone who tried to make a sympathetic hero out of a spider?)

Trumpeters once ranged across the Rocky Mountain west, but were thought to be extinct in the lower 48 by the early 1900s. However, a flock of some 30 birds was discovered in Montana’s remote Centennial Valley (on the Montana-Idaho border) in the 1930s. Red Rock Lakes National Wildlife Refuge at the foot of the Centennial Mountains was established soon after to protect these incredible birds. Today, 70 pairs reside in the western U.S. year-round; 56 pairs live in the Greater Yellowstone Ecosystem, while other flocks live as far afield as Northern California and Southern Oregon. An additional 5,700 birds winter in the Greater Yellowstone area. In addition to Red Rock Lakes, you see swans in Montana in the Madison River complex, the Jefferson River complex, Yellowstone, the Bitterroot River area, and (seasonally) around the Seeley-Swan Valley.

In my research, I discovered these two episodes from Mutual of Omaha’s Wild Kingdom about Red Rocks Lake NWR (Part I and Part II). This are fantastic, not just because they are informative, but for the awesome 1970s music and cinematography.

Oh, and one more picture to round off the post: in addition to being beautiful, graceful, and magnificent, trumpeters can also apparently be territorial bullies: