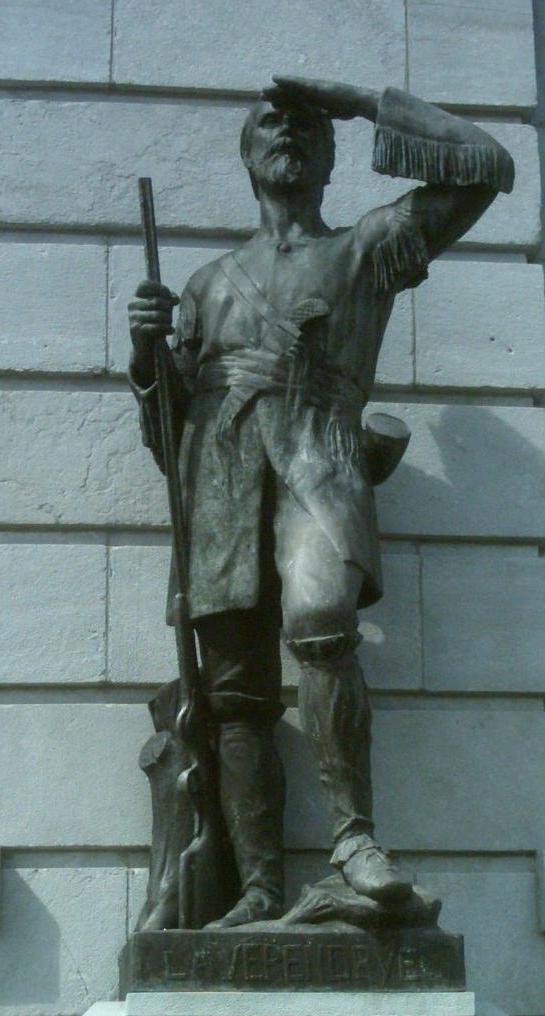 Most people assume that the written history of Montana starts with Lewis and Clark. I’ve said as much on this blog. Most people also assume that Lewis and Clark were the first whites to reach Montana. Neither of these assumptions are quite accurate. The first white men to set foot in what is now Montana were almost undoubtedly French trappers during the late 1600s or early 1700s. We have no record for sure, but French explorers had reached the upper Missouri by the 1680s, and French voyageurs travelled widely across the Northern plains. So I think we can reasonably give credit to a Frenchman.

As far as written history: technically the honor probably goes to a Frenchman as well. Looking for a river route to the Pacific, a French explorer named Pierre Gautlier de Varennes, sieur de la Vérendrye reached Mandan country (North Dakota) in the fall of 1738. For various reasons, he turned back, and promptly got distracted with other matters. Five years later, he sent two of his sons to push further west. His sons, Louis-Joseph Gautlier de la Vérendrye (historians often refer to him as “Le Chevalier,” apparently on the principal that he doesn’t have enough names already. Incidentally, he is also a character in Assassin’s Creed Rouge ) and François de la Vérendrye, reached Mandan country in the spring, and found guides for their westward journey. The journal that the la Vérendryes left behind is ambiguous at best. The la Vérendryes apparently joined up with a war party of “Bow” Indians who were headed west to fight “Snake” Indians. “Snake” has been used to describe a number of Rocky Mountain tribes, and we’re not sure which tribe these “Snake” might have been. As for “Bow,” no one is quite sure which tribe that refers to, especially not in 1743. The explorers’ astrolabe broke early in the trip, so frankly, we have no idea where they went for sure. Current consensus is that they went west to “the mountains of the horse people”—either White Butte, ND, or Southeastern Montana—from there they turned southwest to the Big Horn Mountains in Wyoming, where they recorded seeing “shinning mountains,” which almost certainly referred to some part of the Rockies. At that point, fearing that the Snake had out-flanked them, they turned and fled southeast across Wyoming and part of Nebraska, then north through South Dakota and into North Dakota.

Whew. Their trip is complicated, confusing, and—based on the different theories I sifted through—vague enough to support a variety of conflicting conclusions. However, for the test you just have to remember two important facts: 1) the la Vérendrye brothers almost certainly passed through the southeastern corner of what would one day be Montana and 2) they are the first Europeans to write about seeing the Rocky Mountains, albeit from a distance.

Of course, for all practical purposes, the written history of Montana started with Lewis and Clark. The la Vérendrye brothers contributed almost nothing to our knowledge of the area—we can’t even use their journal to figure out which tribes might have lived here—and, according to some theories, might not have made it to Montana at all. The Moral of this story is: always travel with a functioning astrolabe, oh and if you insist on keeping a journal, try and make it useful.

Of course, none of that really matters, because Native Americans were recording their stories on the stones of Montana a thousand years before the la Vérendryes.

The Manitoba Historical Society and the Big Sky Words blog both have interesting articles about the  la Vérendryes.