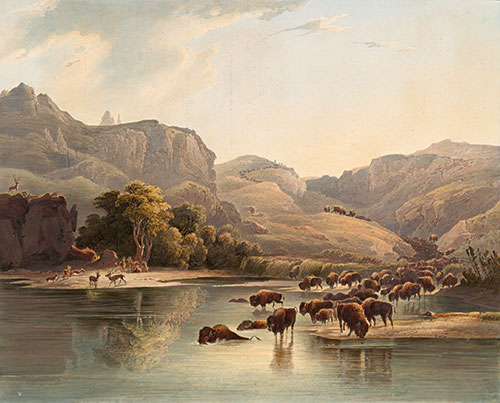 One of the first tourists to Montana was a man named Maximillian of Wied. Or, if you want to be more specific, Prince Maximillian Alexander Phillip of Wied-Neuwied. Unlike the Lewis and Clark Expedition or the fur trappers that followed, Maximillian did not come to explore or make money, he came simply to look around. Born in 1782, Maximillian was a trained naturalist and anthropologist. He had served for several years in the Prussian army and, between 1815 and 1817, he had led an expedition to the Brazilian Amazon, where he conducted a detailed study of the flora, fauna, and indigenous people of the region. He spent the next fifteen years in Europe, presumably performing princely duties in Wied-Neuwied (a small German principality northeast of the Rhine, near the present-day French border). In 1832, he embarked on another adventure, this time to North America, along with his employee David Dreidoppel, a talented taxidermist, and Karl Bodmer, an artist. They toured the eastern United States during the summer of 1832. Sickness forced them to winter in New Harmony, Indiana, and in the spring of 1833 they boarded an American Fur Company steamship headed up the Missouri.

The three carefully recorded everything they encountered, Maximillian with his journal, Bodmer with his watercolors, and Dreidoppel with his…whatever tools taxidermists use. The decade previously, another artist, George Catlin, had travelled as far as Fort Union (on the present-day Montana/North Dakota border), but Maximillian’s party pushed further, across Montana to Fort McKenzie, near present-day Fort Benton. Maximillian wanted to keep going, into the Rocky Mountain Front, but hostilities between the fur trappers and Indians prevented him. As a trained scientist, Maximillian kept careful notes of the plants, animals, geography, and geology of the Missouri River, but the anthropological notes taken by him and Bodmer really set the Wied expedition apart. They encountered the Native tribes during a time of great change. The Northern Plains Indians had had contact with Europeans for a long time—nearly a century—by 1833, but by the 1830s, dominance of the country was shifting to the Europeans and Americans. The culture of the Plains Indians was evolving and eroding rapidly under the pressure of settlers moving west from the states. Maximillian’s journals reveal cultures in the midst of significant change, and capture a time that would otherwise be lost to historians.

The other feature that made the expedition significant was Karl Bodmer. A talented landscape artist, Bodmer captured scenes of the Missouri River country that had only previously been described. He also painted numerous portraits of Native Americans the expedition encountered, as well as scenes from everyday life in the camps and along the river, which historians use to understand Plains life in the 1830s. Back in Europe, Bodmer made etchings from his watercolors for mass reproduction. In all, Bodmer made 81 images for Maximillian’s book Travels to the Interior of North America. Although useful as a historical text, Travels is also a very interesting book, and Bodmer’s paintings are amazing. The Starr Gallery in the Old Fort at Fort Benton has a number of Bodmer works on display. He masterfully captures the stretching sky and the far distant horizon that characterize Montana’s Missouri River. His use of watercolors records less detail than an oil painter might, but the colors and the texture of the works evoke the haze of the hot summer sun in the river bottom.