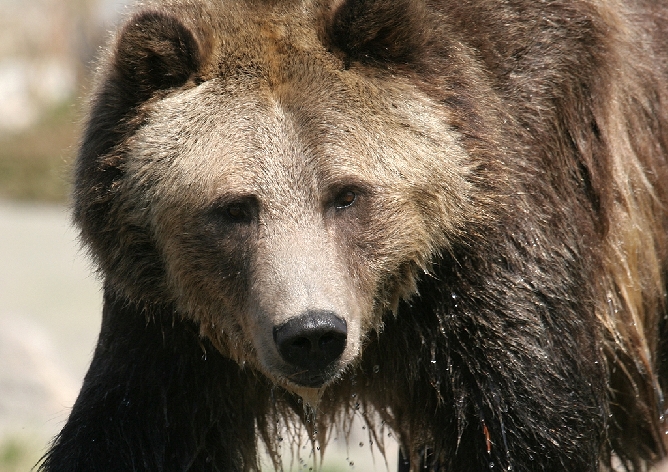 Bears, when you get right down to it, are not graceful, noble creatures. Wolves now, wolves lope over the ground with thoroughbred grace. Whenever they stop, they do so with stoic aristocracy, striking poses like Greek statues. Bears shamble. At once bow-legged and pigeon-toed, they amble snuffling through the world, and run like furry bowling balls. It is easy to see why bears show up in stories as dozy, good-natured bumblers, like Baloo from The Jungle Book or Little John from Robin Hood (the Disney version, obviously, all other versions are patently inferior), until you actually watch a grizzly bear. I don’t know how to describe it. It’s not graceful, but it is power under complete control. Watch a grizzly and you know instinctively exactly what they are: giant balls of fluff that can run as fast as a horse, crush bowling balls with their jaws, and casually send 700 pound trash cans toppling end-over-end. Oh, and they use their scalpel-like claws with such dexterity that they can pit a peach in a single movement. So while one part of your brain snickers as they shuffle along, another, wiser, part of your brain is starting to think that the electric fence and deep moat at West Yellowstone’s Grizzly and Wolf Discovery Center maybe aren’t quite enough.

Of course, grizzlies aren’t malicious or evil—they kill fewer people each year than bees—but they are wild. Wild and used to doing exactly as they please, which is why bears in human environments can be so dangerous. Part of the mission of the Grizzly and Wolf Discovery Center is to educate people about how to make human environments unappealing to bears. This involves things like not leaving food and bird-feeders outside in bear habitat, keeping trash in bear-resistant containers, and fencing gardens or tasty snacks like chickens. The Center also puts on Karelian Bear Dog demonstrations. Wildlife specialists use Karelian Bear Dogs to shepherd bears by scaring them away from human spaces. However, sometimes these methods don’t work—certain bears become acclimated to humans. In the old days, these “problem bears” were either relocated (which does nothing but relocate the problem) or euthanized. Many of the bears at the Center were problem bears who had become a danger to humans and to themselves. The Center is dedicated to educating people about bears, showing that they aren’t monsters, but that they aren’t tame.

The Center is also dedicated to ensuring that the animals lead a stimulating and interesting life, which brings me to my favorite part of the Center: the enrichment program. The bears get many small meals throughout the day, just like they would in the wild. Sometimes they get logs filled with frozen peanut butter that they have to rip and tear, just like they would to eat bugs in the wild. Sometimes they get meat wrapped in hides. Sometimes food gets hidden around the enclosure—under rocks, in trees, in the water, covered in dirt—like it would in the wild. And who hides the food, you ask? Twice a day during the summer, the bear keepers take kids, ages 5-12, give them a brief lesson about bears, and let the kids traipse around an empty bear enclosure, hiding food. Seriously. This seems like the best program ever. Not being between the ages of 5 and 12, I was not invited to participate, but how cool would it be to get to go into a bear enclosure and hide food? Pretty darn cool.

So basically, I am really impressed with the Grizzly and Wolf Discovery Center in West Yellowstone, and I think that everyone should go visit it, right now. The Center is an AZA (American Zoological Association) accredited non-profit. It takes bears, wolves, and raptors that couldn’t survive in the wild—either because they were orphaned, problems, injured, or bred in captivity—and give them stimulating natural homes. The wolves and raptors were really impressive too, but, as you can tell, the bears really captured my interest this time around.