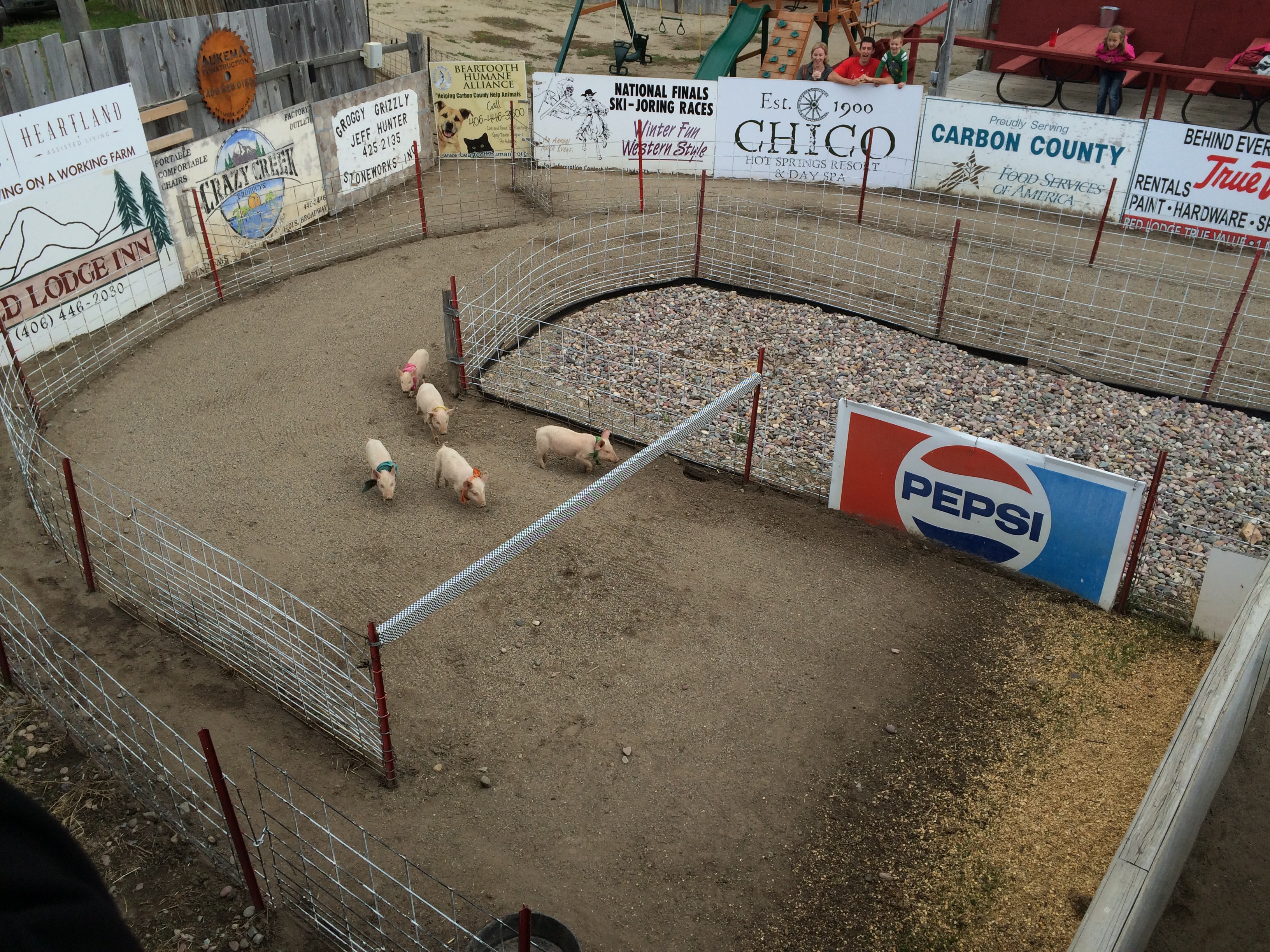 The crowd—small yet, it is still early in the season—waits in anticipation as the racers file into the starting gate. The “Call to the Post” blares scratchily over the loudspeakers. With an ear-splitting ring, the gate bursts open. The racer in the green silks pulls ahead early…rounding the first corner…into the backstretch…and stops abruptly, snuffling at an interesting clod of dirt on the track. Intrigued, the other racers follow suit. The stands erupt in laughter, the few people with bets on the race yelling encouragements. After a few moments of inactivity, one of the track keepers vaults the low fence onto the track and urges the competitors to continue, which they do, snorting and sneezing. 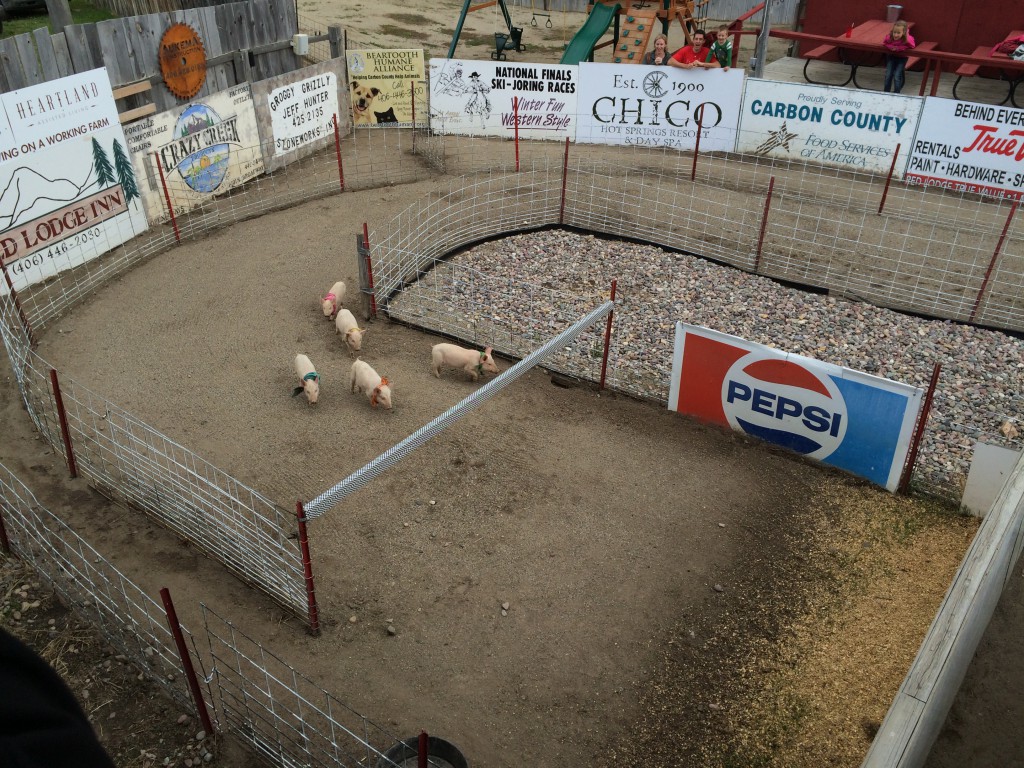 Welcome to the Pig Races at Bear Creek. Once a mining metropolis with seven mercantiles and 3,000 residents, the town today boasts something closer to 70. Mining operations shut down in 1953, and the town quickly dwindled. By the 1980s the Bear Creek Saloon stood mostly by itself, catering to the small stream of Yellowstone-bound tourists that wandered off the main road. In 1988, one third of the Park burned in a vicious wildfire, and the town’s few visitors disappeared. Casting around for a way to draw customers, the Saloon owners landed on pig racing. One wonders how that conversation might have gone:

“We’re running out of money, what should we do?”

“Let’s train a bunch of pigs to run in a circle.”

All joking aside, the success of the Bear Creek Pig Races proves true the old saying that all problems can be solved with a can-do attitude and a couple of trained pigs. Excepting a brief legal tussle that ended with the passing of an incredibly specific bit of legislation, the “”Bear Creek Downs” Pig Races have flourished for the last 25 years.

We came on a quite Friday, two weeks after Memorial Day. After a leisurely dinner of steak and baked potatoes, we strolled out to the deck overlooking Bear Creek Downs. The season starts on Memorial Day weekend, so the pig(lets) were still very small and inexperienced. The first few races went well: the piglets barreled gleefully to the food at the finish line, but as the night wore on, they started to get full, and increasingly less interested in the food and more interested in scratching themselves on the fence or rooting around in the dirt. Eventually, owner Pits DeArmond says, the pigs get used to the routine and go straight for the food every time, but for the first few weeks, anything can happen. 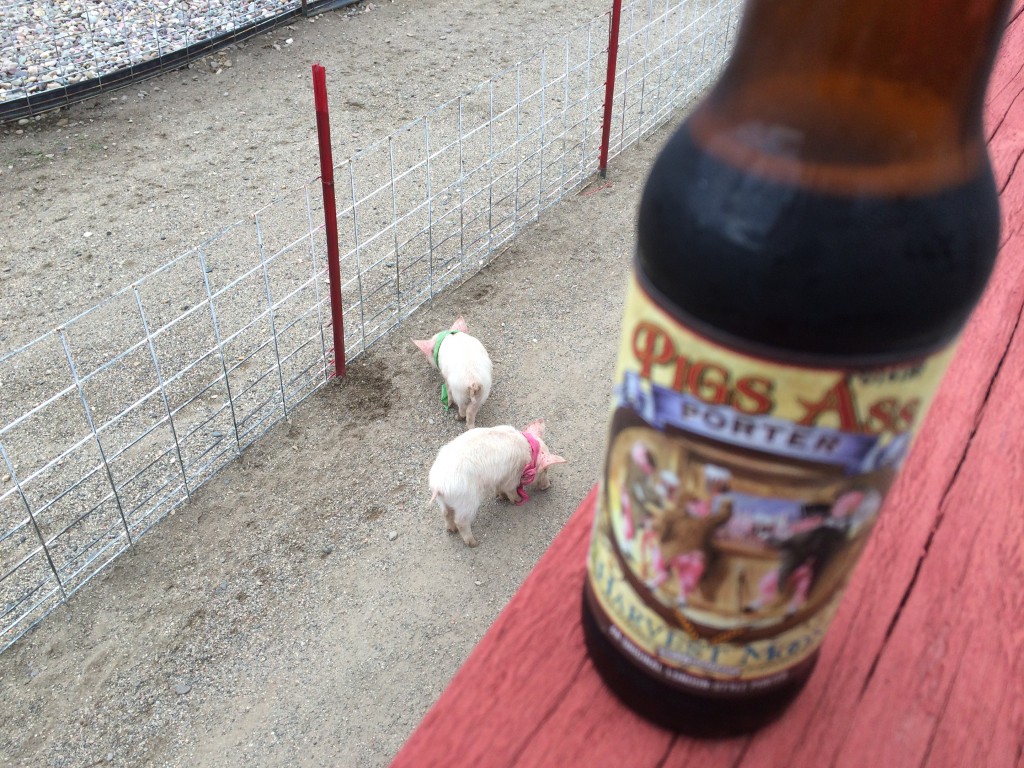 The Pig Races take place during the summer every Thursday through Sunday. The steakhouse opens at 5:00 and racing starts at 7:00. We went early enough in the spring that the crowd was pretty small, but by the end of summer, the races will be raucous affairs, and if you want to eat dinner beforehand (you do, because their steak is amazing) you’ll absolutely want a reservation. For legality’s sake, the betting is a random pool: you pay $2.00 to enter your name, and five people are assigned pigs each race. Half of the money goes to the winners, the other half goes to a scholarship fund. Over the years the fund has supplied over $100,000 to local students.