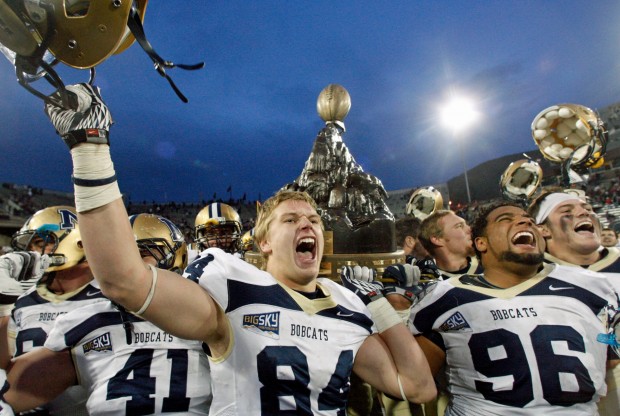 The Montana rivalry between Montana State University and the University of Montana runs much deeper than the annual football game. Last week on the blog, we highlighted UM, and now we will take a look at what bleeding blue and gold — GO BOBCATS — looks like. Current students and alumni alike are more than comfortable claiming Montana State University (MSU) as their home. Whether or not it is acknowledged while in attendance, MSU changes its students and leaves a lasting impression on their hearts. Founded as a Land-Grant Institute on February 16, 1893, MSU is one day older than its Missoulian counterpart.

Ranked by the Carnegie Foundation as being 1 of only 108 colleges and universities in the US to have ‘very high research activity,’ and of those 108, just under half (51) are also recognized for high community engagement, MSU is the ONLY school to hold both classifications and be classified as having ‘very high undergraduate enrollment.’ But what does this mean for our students? Each degree program requires those enrolled to participate in research, whether that is consulting with local businesses, working in the public schools, testing a variety of fertilizers/chemicals, or exploring the Earth from a new perspective with the assistance of rockets. Additionally, students can continue their participation in research by working in a lab or partnering with a professor in their chosen fields as undergrads. The outcome? A world class education which has helped to produce 58 Goldwater Scholars, putting MSU in the top 10, alongside Princeton, Harvard, and Duke, for the highest total number of Goldwater scholars from a single university.

MSU could also boast the recent private donations to the College of Engineering ($50 million from Norm Asbjornson) or the College of Business ($25 million from Jake Jabs). Our College of Engineering is a huge draw to MSU, offering hands on experience for 11 different degrees within the College. Our College of Business is AACSB accredited along with only 5% of Business Schools in the world, focusing on interdisciplinary thinking and student engagement. MSU’s Earth Sciences department is second to none, offering unique programs in Snow Sciences and — with the Museum of the Rockies just off campus — Paleontology. The Paleontology program is led by Dr. Jack Horner, who, in addition to being a lead paleontologist in the world, played a large consulting role for the Jurassic Park Films. These programs are just the tip of the iceberg at MSU, which offers additional degrees through the Honors College, College of Nursing, College of Agriculture, College of Health & Human Development, College of Arts & Architecture, and the College of Letters & Sciences.

Or maybe, we look at the consistently growing campus — with 25 miles of sidewalks — and the recent renovations from residence halls and dining commons — with a full service ‘all you can drink’ coffee bar — to instructional buildings.

On the topic of buildings, each has their own story. Wilson Hall for example, houses the College of Letters and Sciences. This building is a labyrinth of offices and classrooms, designed by an architect who also designed a women’s prison, maybe the inhabitants aren’t meant to leave. At the center of campus lies the duck pond, a $250,000 donation which is home to the ducks year round, providing year round entertainment for the community. Cheever Hall, the home to the architecture students was, as of 4 years ago, the most un-structurally sound building on campus. The stability of Cheever has since been fixed, but giant metal supports remind us of the irony on a daily basis. Or Romney Hall, where the 1929 Golden Bobcats played and won the equivalent of the NCAA basketball championship. It hasn’t been done since, but holding onto the 1929 victory gives us hope moving forward.

Situated in the heart of Bozeman, campus is no more than a hop away from where you want to be. In the words of the Director of Admissions, location is key. Bridger Bowl Ski Area is only a half hour drive away, while Big Sky Ski Resort known for the ‘biggest skiing in America’ is only an hour drive. In the area, there is a pleasant downtown with local shops and restaurants to keep you busy all day, biking and running trails located just off campus, and a variety of destinations perfect for camping, hiking and fishing. With proximity to Yellowstone National Park, it is not uncommon find a weekend caravan headed in that direction. But what truly sets MSU apart is the investment they make in their students and alumni.

The Brawl of the Wild (Cat Griz Game) is just days away, and as Montanans turns on their television sets to support their team, it is not a question of which school is better, but which school they call home.