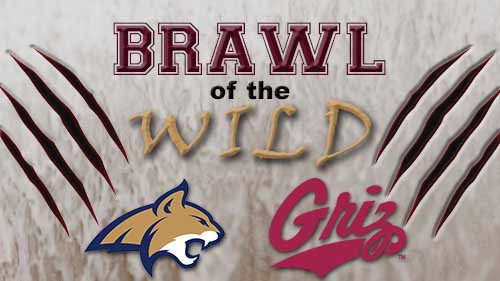 This Saturday, at 12:10pm, the most important sporting event of the year begins. I am talking, of course, about the Brawl of the Wild, the Great Divide Trophy: Cat-Griz 2015. The University of Montana Grizzlies and the Montana State Bobcats have faced off on the football field every year since 1897. In its 115th year, the rivalry game between Montana and Montana State is the 31st oldest in the country, and the 11th oldest west of the Mississippi. It is also the most important game that the teams play each year. How do I know this? Because even students and alumni who don’t care about football at all care about the Brawl of the Wild. Big Sky Conference Championship? Meh. NCAA Championship? Pffbt. Cat-Griz? Buy tickets a year in advance, don every piece of school clothing you own, paint your face, and find where the nearest viewing party is (that part shouldn’t be hard, alumni from UM and MSU host nearly 200 satellite parties across the nation and the world). Cat-Griz weekend is serious stuff. The serious-est.

Let’s back up a second and mention something that we probably should have addressed in our previous two posts: names. Montanans, students, alumni, even Wikipedia, refer to UM and MSU as ‘Montana’ and ‘Montana State’ respectively. I don’t know if this is unique to the state or not, I kind of assume that it isn’t, but it causes endless confusion for out-of-staters. So to be clear: Montana=UM, Montana State=MSU. Griz fans also refer to MSU as just ‘State,’ but that might not be politically correct, as I have only ever heard it used in cheers like “Beat State!” (and other more colorful variations).

Back to the game. The Brawl of the Wild takes place every year in November. Technically it is no different from any other game, but it is so much more than just any old game. Not least because it gives you something to talk about with those random relatives that you only ever see at Thanksgiving and family reunions. In 2001, a group of donors got together and decided that it was outrageous that the game was technically just a regular game, so they created something called the Great Divide Trophy. Each year, the Trophy passes to the team that wins the game, and the school with the most wins between 2001 and 2099 will keep the Trophy forever.

This year the Brawl of the Wild is in Bozeman, and starts at 12:10pm.

If you can’t make it to a viewing party, watch it live: