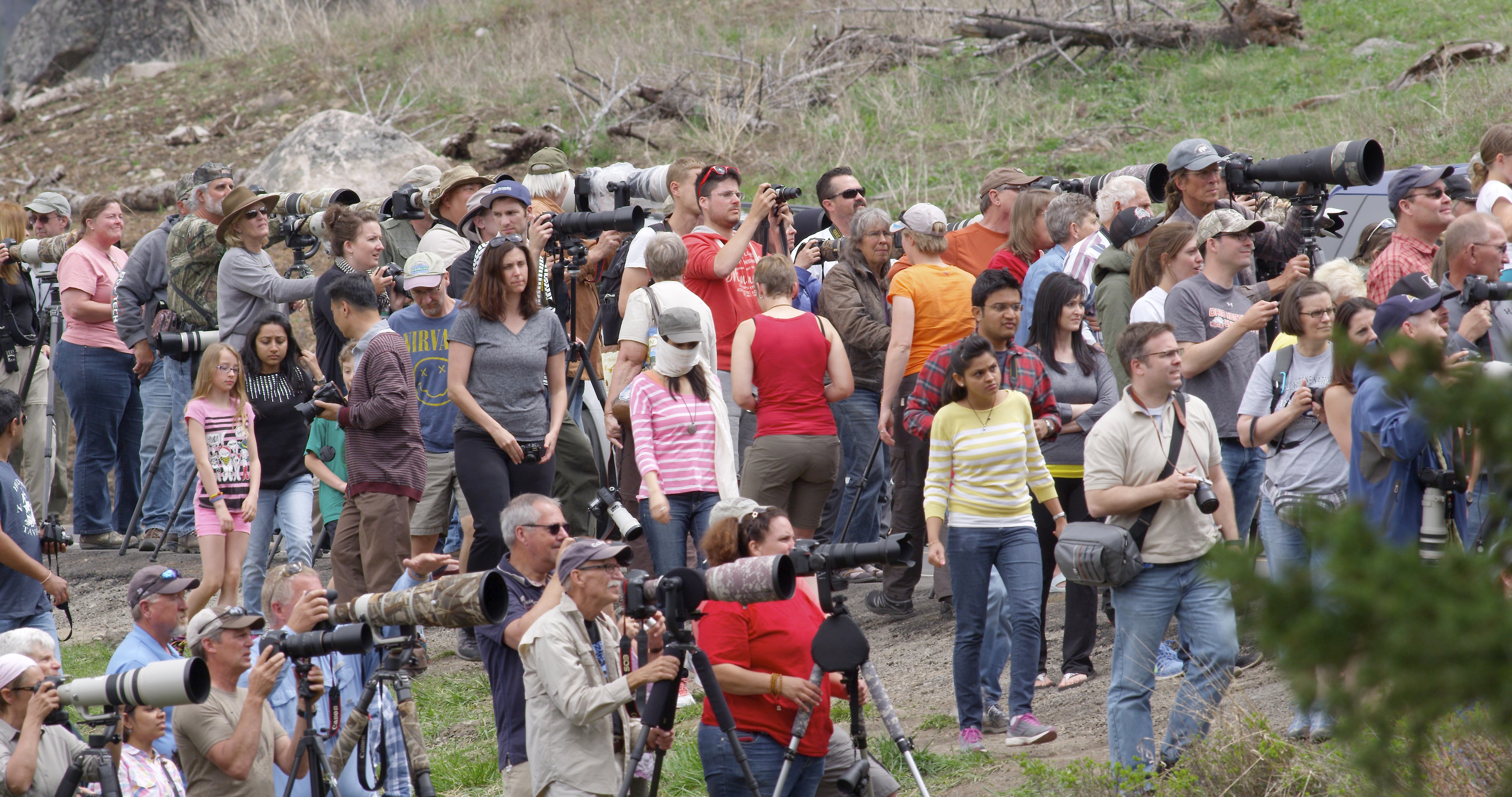 Although rewarding, photographing animals is “always hit and miss. Sometimes you’re late to the party, and sometimes, you know, you start the party. You spot the animal first, and it’s not long—especially if you’re on a road—before other folks join you.”

An animal sighting, any animal sighting, draws huge crowds. Traffic slows to a crawl as drivers peer through their windows, looking for the source of the excitement, deciding whether or not to stop. Bearjams happen at the drop of a hat. People will stop for anything from a pack of wolves to a single deer on a distant hill. Mike got fooled a few times on this trip by huge bearjams that turned into duds.

Many photographers monitor CB channels to stay up to date on animal movements, but with so much happening in the park, lots of the great shots come down to the luck of being in the right place at the right time. Every time you stop, you make a decision not to stop somewhere else.

“You just never know, and talking with lots of other photographers over the past week there it’s something that happens to all of us[…] you decide to stop and film dandelions for twenty minutes and because of that you are delayed getting to something else and you miss some incredible shot.”

The number of visitors is a factor as influential as lighting or weather when shooting video in Yellowstone. Too many people can spook the animals, or interfere with shots. Numerous times on Mike’s trip, rangers would come up to groups and ask them to move or even leave if the animals had gotten too close to the road. Mike says, “There’s nothing you can do about it. That’s part of the—I guess that’s the package deal—for shooting in a place like Yellowstone. Great wildlife filming but you also have to deal with […] hundreds of tourists. Which in a way I am one, I contribute. I recognize that.”

While making an audio entry, Mike encountered a bearjam, this excerpt from his recording perfectly summarizes what goes through the mind of every Yellowstone goer on seeing a bearjam:

“So. It’s pretty snowy here, Fishing Bridge—There’s a lot of people on the bridge…I have to sort of look and see why so many people…people are pointing…is it a really cool…duck? Or what the heck are they…hold on a second, just coming up to where they are. Hmm, I’m looking. Oh, just a bunch…a flock of ducks in the water, doing a very interesting…hmm, I might have to find a place to park if they keep doing that.”