Tempest videographer Mike Dreesman spent the first week of January in Yellowstone National Park. He took some stunning footage of big horn sheep, bison, eagles, and scenery, but probably his most arresting footage was of two carcasses in the snow.

Mike spent nearly four hours taking video of a bison carcass which lay half submerged in a frozen stream about 10 miles from Mammoth. A coyote had laid claim to the carcass and spent the afternoon slowly gnawing away. Of course, other scavengers wanted their share of the meal. The coyote had to chase off a rival coyote multiple times, and although it mostly ignored the pair of ravens feeding on the carcass, it eventually became irritated with them too. In order to survive the harsh winter months in Yellowstone, coyotes will eat just about anything to survive. Most survive on a combination small mammals, plants (if they can find some), and the leftovers of other predators. For scavengers like coyotes, a bison carcass is a bonanza of nutrients and calories.

On another day, Mike spent quite a while filming a golden eagle feeding on the carcass of a coyote. He didn’t know if the eagle had killed the coyote, or if it was a victim of the cold. Either way, the scavenger became the scavenged. Mike said the scene was “almost like a scene from The Walking Dead, except that it was a living eagle.” The time spent videoing the golden eagle was one of Mike’s most successful eagle shoots ever: a good, if grisly, way to end another successful trip to Yellowstone National Park. 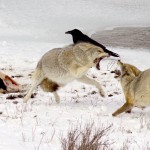 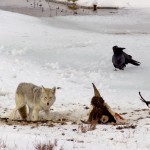 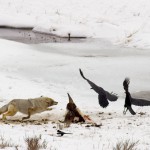 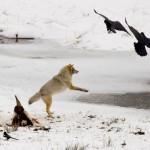 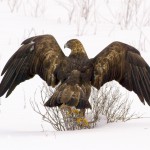 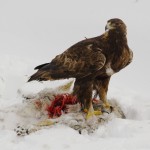 Here are clips of both events that Mike just finished editing: