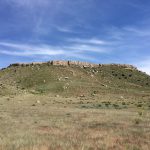 The whoop and cry of the braves. The startled bellows of the bison as they plummet to their death. The schthichk of skin ripped from flesh. The chanting murmurs of the butchers. Wood smoke. Dust.  Blood crushed grass. Raw meat, slowly heating in the sun. This is the pishkun, the deep blood kettle. For over … Read more 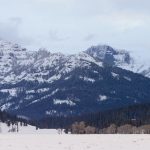 Tempest videographer Mike Dreesman spent the first week of January in Yellowstone National Park. He took some stunning footage of big horn sheep, bison, eagles, and scenery, but probably his most arresting footage was of two carcasses in the snow. Mike spent nearly four hours taking video of a bison carcass which lay half submerged … Read more 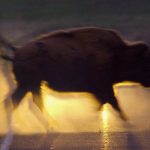 Serendipity Photographers spend a lot of time waiting for shots that never happen, and thinking about shots they missed. But sometimes shots spring up on you with no warning whatever. Initially Mike drove right past this moose sighting near Norris Geyser Basin, thinking that the shadows and lighting were bad. After a while of driving … Read more 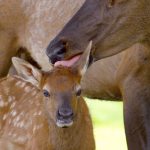 This May, Tempest videographer Mike Dreesman spent a week  in Yellowstone National Park, sleeping on an air mattress in the back of his van and living off of bologna sandwiches and peanut butter and honey, all so he could get the best possible video of the Park in spring. When he got home, he pulled … Read more 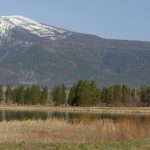 Founded in 1908, the National Bison Range celebrates its 106th birthday today, May 23, 2014. For information and directions, visit the Virtual Montana website.