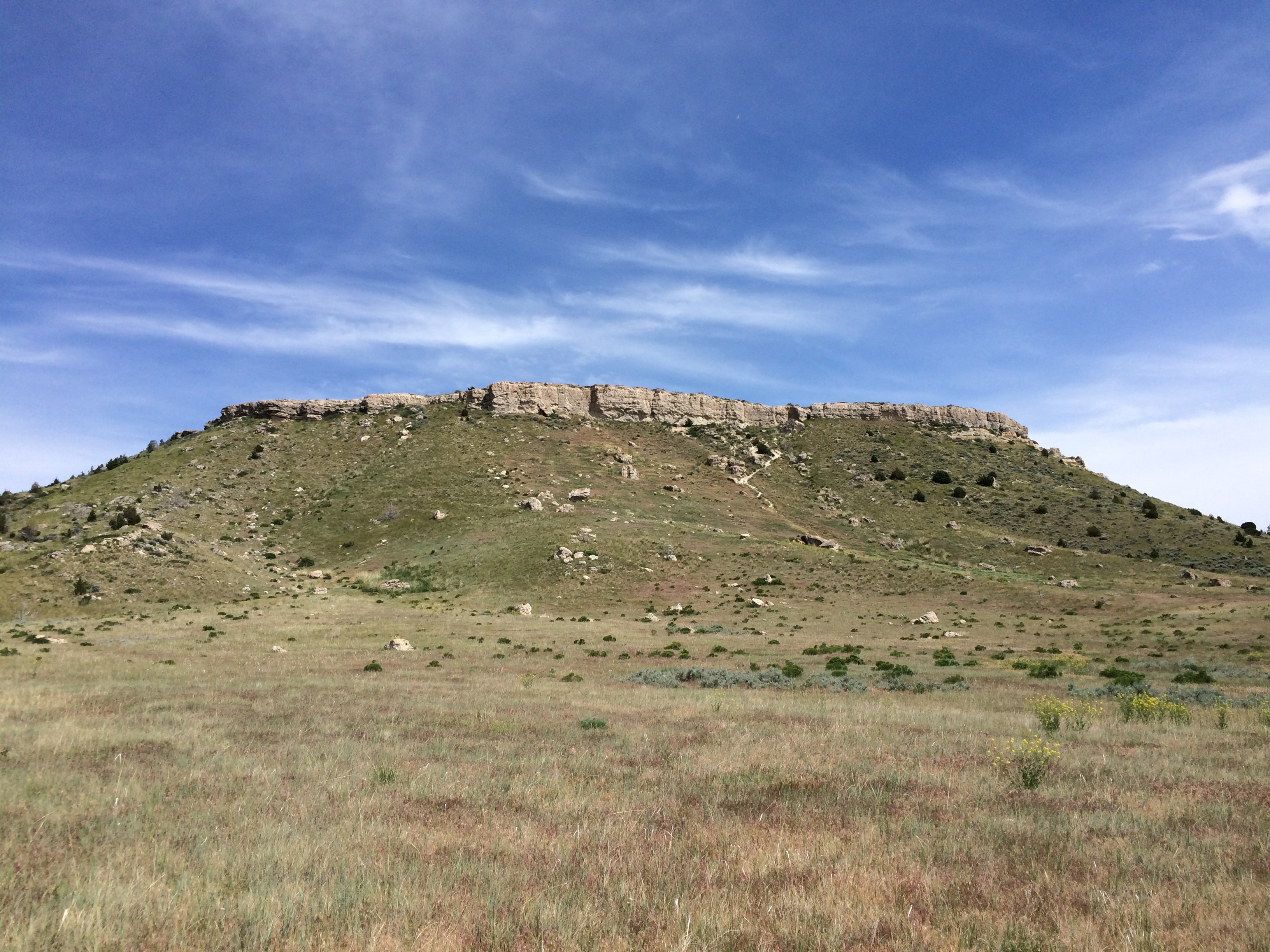 The whoop and cry of the braves. The startled bellows of the bison as they plummet to their death. The schthichk of skin ripped from flesh. The chanting murmurs of the butchers. Wood smoke. Dust.  Blood crushed grass. Raw meat, slowly heating in the sun.

This is the pishkun, the deep blood kettle. For over one thousand years the Madison Buffalo Jump near Logan enabled comparatively feeble humans to take down the greatest animal of the American plains—the buffalo. Perfected over a millennium, the buffalo jump is one of the great innovations of pre-equine plains hunting. Using a variety of methods, Indian warriors would whip herds of buffalo into a frenzy, herding the agile behemoths to the brink of a cliff, where, unable to stop because of the stampede behind, the buffalo would fall to their deaths. Butchers (probably women) would then take over, dispatching any survivors, skinning, cleaning and butchering the animals. A persistent myth exists that the Indians, in their role as proto-environmentalists, would utilize every facet of the dead beasts. The eighteen feet of bison remains at the bottom of the First People’s Buffalo Jump near Ulm, Montana belie this notion. Certainly motivated by respect for the animal and necessity, the Indians would use more of the buffalo than later hunters, but they also left enough behind for archeologists to establish the site as dating from at least AD 500, making it one of the oldest such sites in North America.

Madison Buffalo Jump State Park stands today as a monument in remembrance of the native people of the area.  This State Park offers a glimpse into Native American culture and provides evidence of their lifestyle.  Only ¼ mile from the entrance to the park is an interpretive pavilion which offers insight regarding the events that took place at the jump site for thousands of years.  Visitors are also welcomed to take a beautiful hike to the top of the jump.  The views from the ridge are breathtaking and span for miles.  Sites at the top include the jump, drive lanes, and tipi rings; while down below you can see the butchering area, old bison trails, and bones at the base of the jump.

I recently had the opportunity to visit the park myself.  It was a beautiful day, the sun was shining, the birds were singing, and the trail was waiting.  Unfortunately, I made a few rookie mistakes on my trip.  Mistake #1– as one of the most “fair skinned” human beings, it is a rule that I constantly lather myself up with sunscreen to avoid the unwanted sunburn that, rather than slowly fading into a nice tan will quickly peel and turn bright white once again.  Yup, that’s right I forgot sunscreen.  The trail is beautiful, but you are on the prairie in the direct sun! It’s the perfect place to soak up the sunshine! Mistake #2- working hand in hand with mistake number one, I chose an outfit of jeans and a black t-shirt … not the best choice at 90 degrees.  Mistake #3- as I climbed up the side of the buffalo jump, I pulled out my camera ready to take a beautiful shot looking down the cliffs, and the lens I had left on the camera was a telephoto lens – not prime for wide angle shots.  Luckily I had my iPhone with me and the pictures didn’t turn out horrible!  Even given this series of unfortunate events, I would recommend a visit to the Park in a heartbeat!

As I stood on the edge of the limestone cliffs, I couldn’t help but imagine what it would be like to be one of the bison being driven over a cliff.  Sitting there, feet dangling off the edge, I quickly understood how a buffalo jump would function and result in a successful hunt.  Although I was imagining what it would be like to be a bison, I didn’t proceed to jump off the cliff; then again, there wasn’t a raging stampede behind me.  Below is an image taken looking straight forward, a bison’s last glimpse, to the right of that is the view down the cliff below taken in the same spot.

Though it is entertaining to think of the incidents from the perspective of an American Bison, the amazing story stems from the people.  Performing a hunt on a buffalo jump held incredible significance for the Native American people.  Each member of the tribe contributed in one way or another.  In preparation for the hunt ceremonies were held, prayers were sent, and the tools for the process were gathered.  The Native American people would then celebrate and give praise for the provisions they had been given.  Being a resourceful people, these hunts would provide for nearly all of life’s needs and hold the tribe over through the long harsh winters.

Today, the park welcomes hundreds of visitors and is the perfect place to get out stretch your legs, and enjoy the history of the area!  Montana’s 54 State Parks have a range of historical significance, offer great day trips, serve as a great wildlife viewing platform, and are the perfect excuse to get out and enjoy all that nature has to offer.  Located just outside of Logan, MT, Madison Buffalo Jump State Park is a great stop on a road trip across the state!