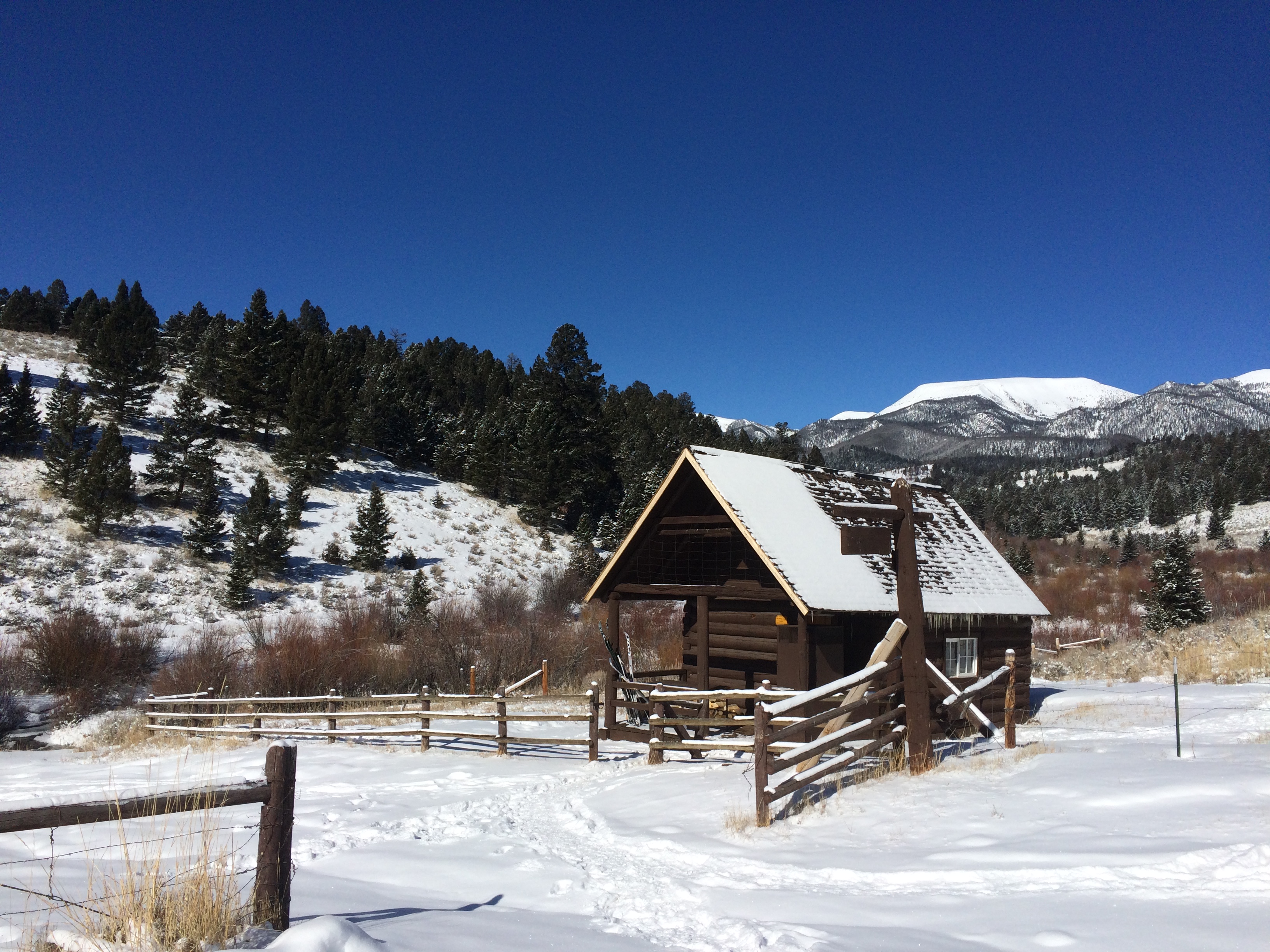 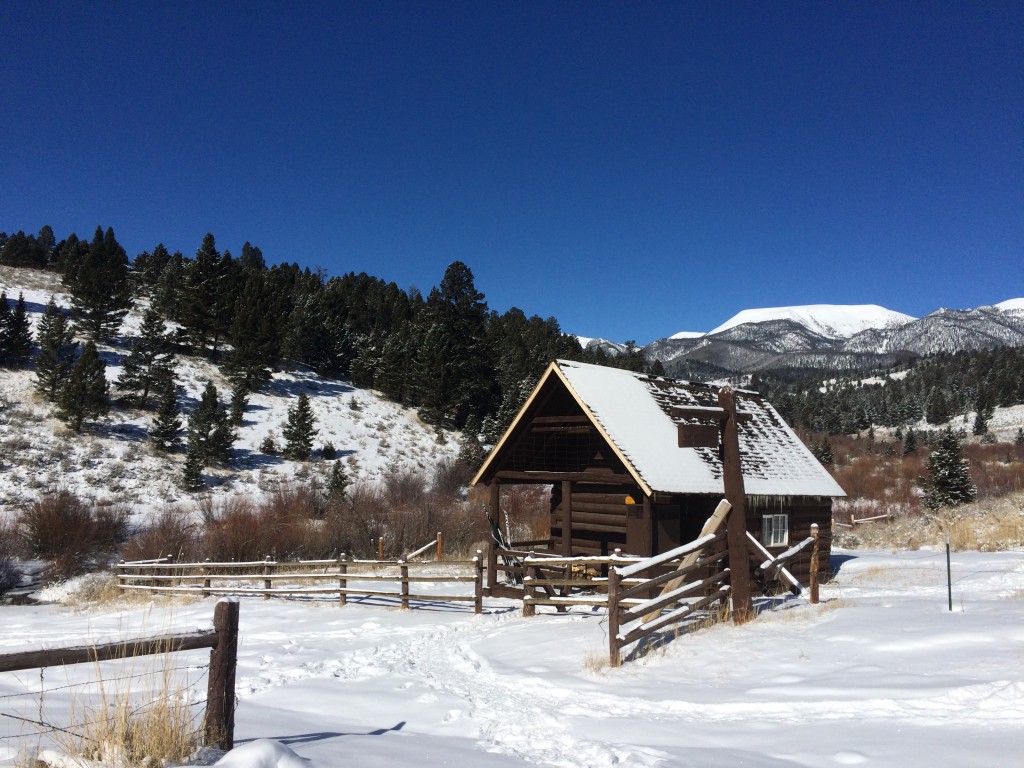 Back in January, we made plans to cross-country ski into a Forest Service cabin. I spent the next month in a near panic, worried that we wouldn’t have any snow to ski on. I spend a lot of time worrying about the weather when we plan trips. In fairness, the country only a few miles from the cabin looked like this: 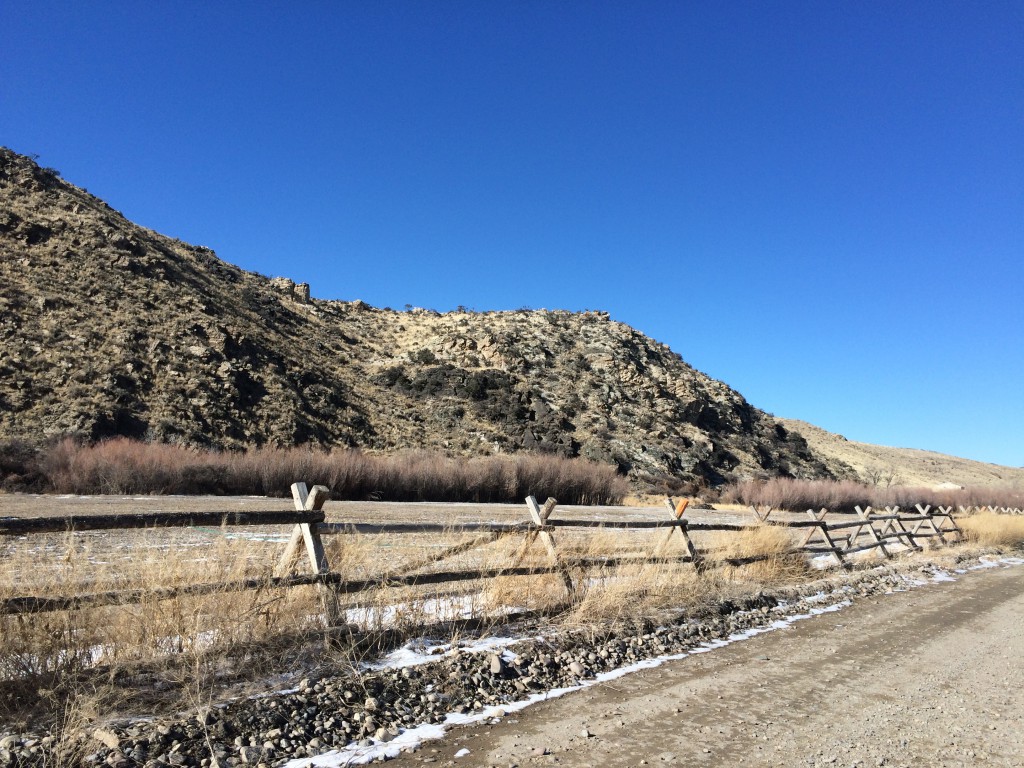 So I think that my worry was probably justified. Of course, it snowed all of last Saturday–the day we headed up to cabin. So my worry, with a dexterity I’ve come to appreciate, quickly turned to what if there’s too much snow?! What if we get stranded miles from civilization and we have to burn the upholstery for warmth and try and survive on pine needle tea and when they finally find our dead bodies in the spring my parents are mad because I borrowed their SUV and now it doesn’t have any upholstery?!?

This worry may not have been as justified.

Although we did end up stopping three miles from the cabin because we didn’t want to get stuck. We would later find that we had already driven through the steepest, nastiest, drift-iest bit of road by that point, but it worked out for the best because three miles of gradual hills is an absolutely ideal distance to ski into a cabin with packs.

I don’t have any pictures of this part of the trip because the weather was only pleasant as long as you kept moving, and frankly, there wasn’t much to see. The clouds were low and gray, it was snowing. Peaceful, but not photogenic.

We reached the cabin without loss of limb or life.

We huddled by the fire. We played hearts. We ate. We talked. We relaxed. The snow fell outside. The fire crackled.

I wonder what the Forest Service would do if I moved into one of the those cabins and just refused to leave? 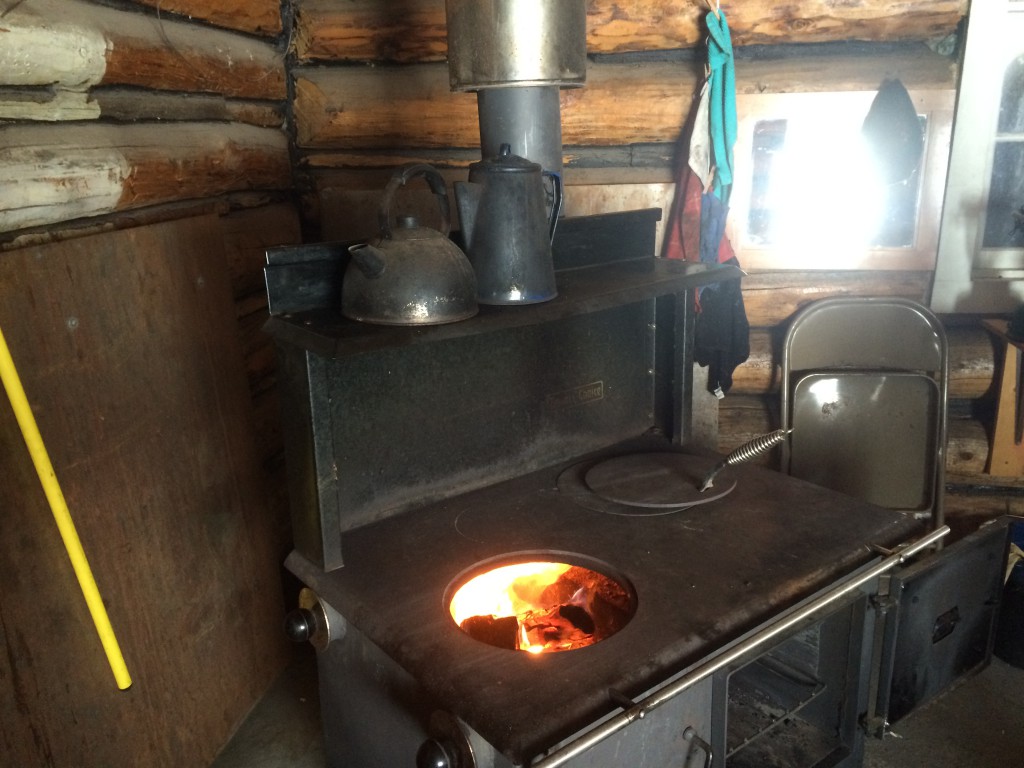 For dinner, my wife and I hauled in fresh salad and potatoes (which take a ridiculously long time to cook in a fire) and metal cutlery and these old fashioned metal plates that weigh a ton a piece and are probably covered in lead based paint. 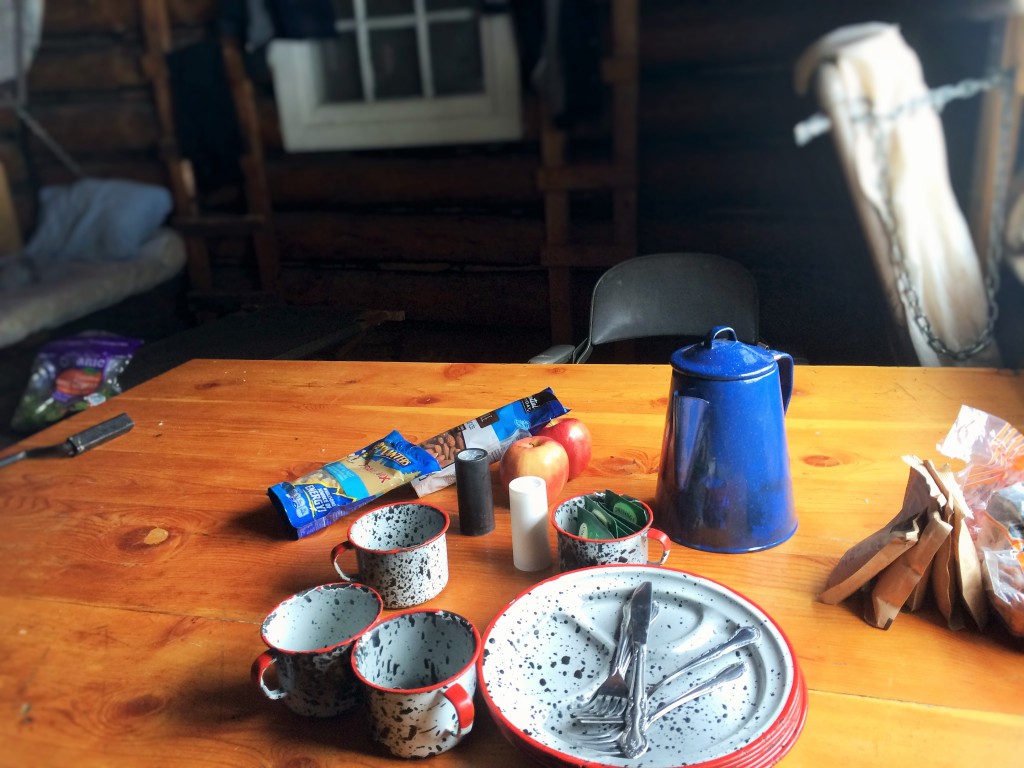 Our friends ate soup from a can that they warmed on the stove. But our setup made more Pinterest-y pictures.

By nightfall the snow stopped falling, and we could see the stars. You know how Orion’s Belt is the easiest winter constellation to find? It was so cluttered with stars that we almost missed it. Just a sliver of the moon was illuminated, but we could see the whole thing–a dark spot in an otherwise brilliant sky. We could see Jupiter. We could see Mars and Venus which, incidentally were nearly as close as they ever are. We could feel our toes turning to ice cubes and falling off. We went back to the fire.

Sunday morning dawned clear and to our surprise we found ourselves in a gorgeous creek bottom surrounded by epic mountains. 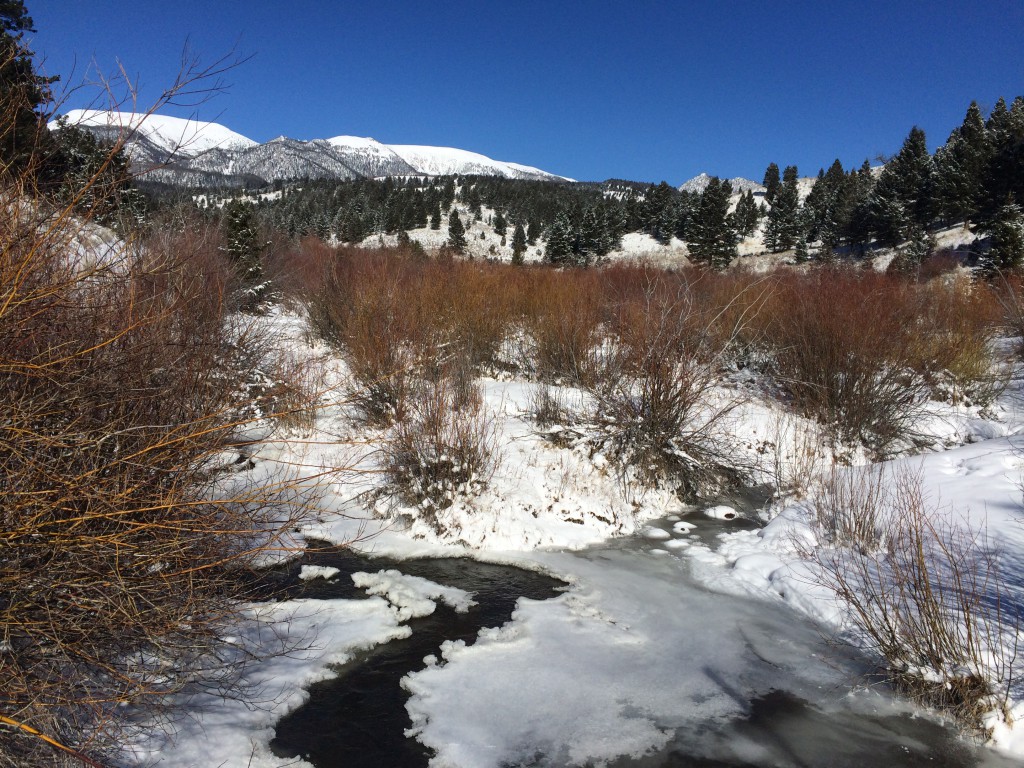 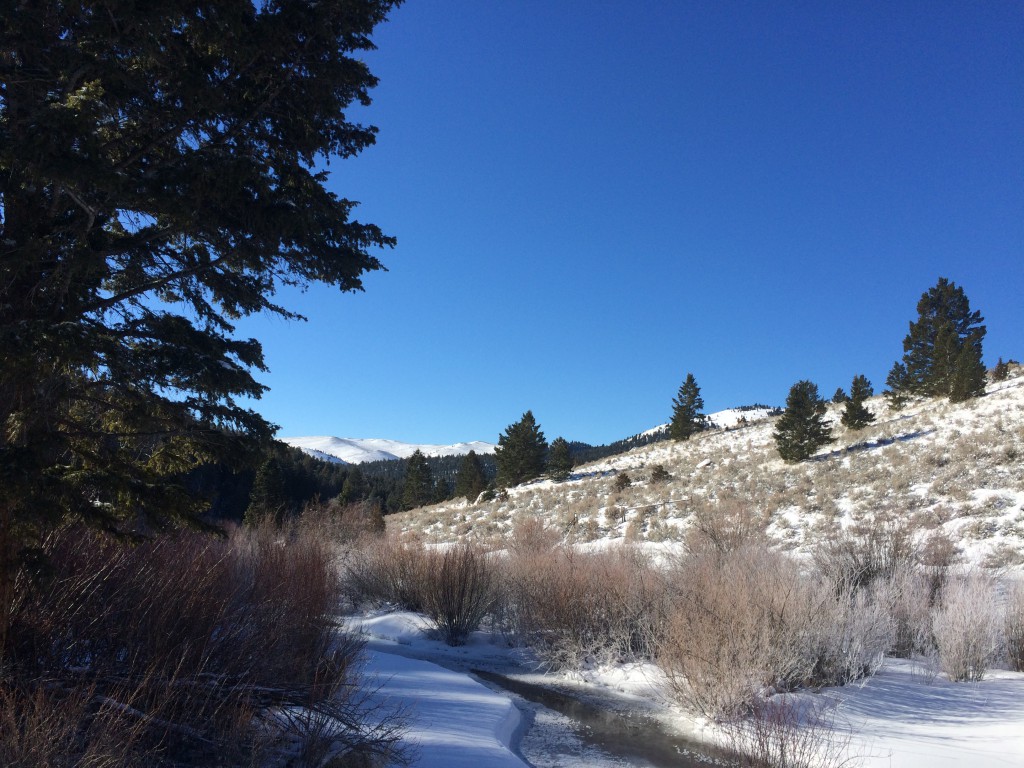 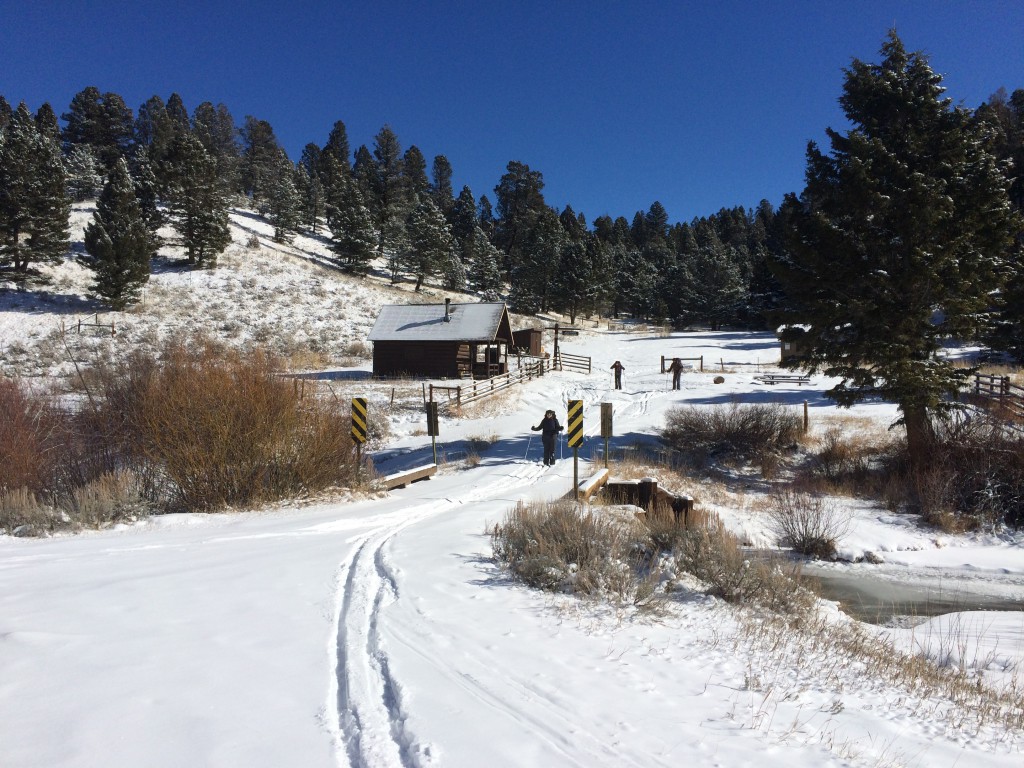 On the way out, we encountered fox tracks, rabbit tracks, small-rodent-with-tail tracks, and the world’s smallest moose tracks. Or maybe they were deer tracks. Yeah, they were probably deer tracks.

This is the view near where we parked. We were in the Highland Mountains. We could see, from left to right, the Tobacco Roots, the Madisons, the Gravellys, and the Rubies. 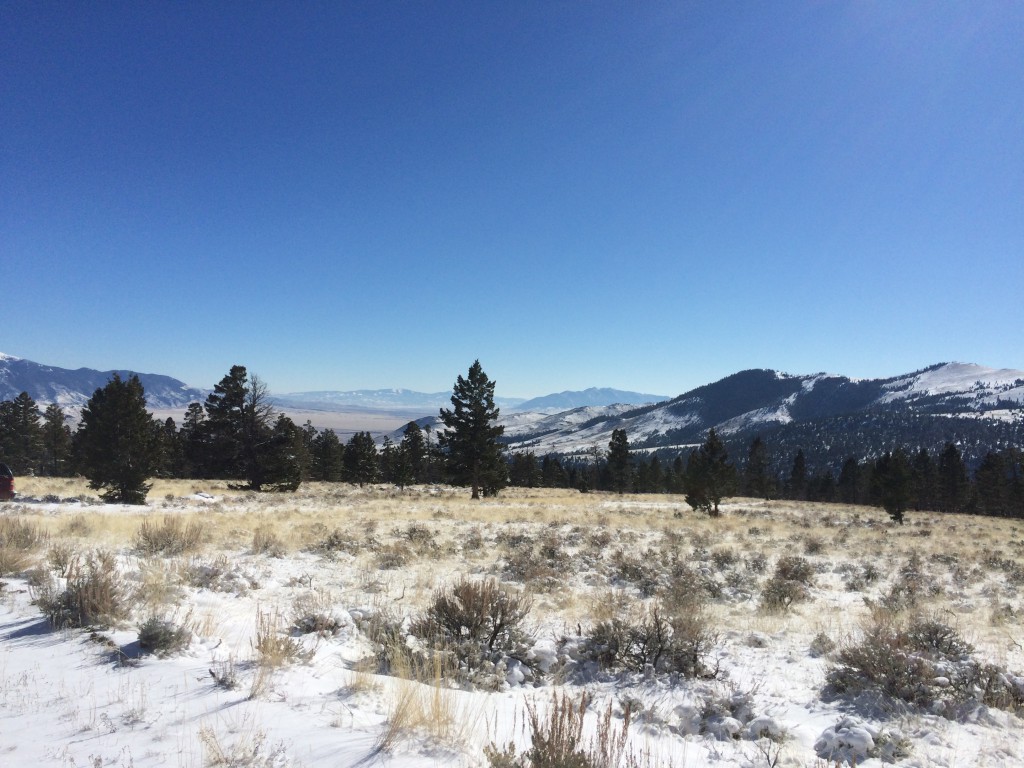 The day before we could see the trees. But only the close ones.

On the way in, we had been so focused on not getting stuck, or maybe it was so cloudy, that we drove right past this tree, which looks like it belongs on a film set. 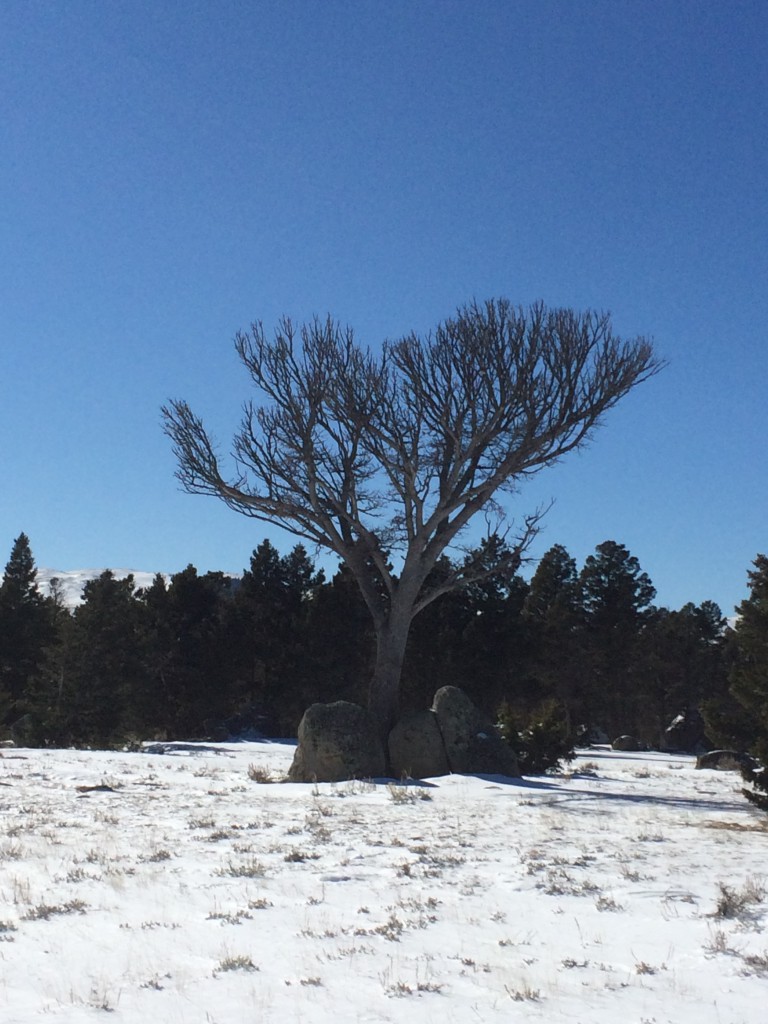 In conclusion, the month I spent worrying about the weather was absolutely worth it. The snow was ideal for skiing. Saturday was nice and cozy. The night was clear and bright. Sunday was breathtaking. Who knows what the weather would have done if I hadn’t worried.